“The Liquid Heat public art project is as deeply rooted in Harlem as it is in Havana. Jessica Angel celebrates the power of Afro-Cuban Rumba and the sense of community that it brings.”
Voza Rivers, Executive Producer of HARLEM WEEK
The installation will be accompanied by a custom- made soundtrack with a reading by Alden Knight of one of Afro- Cuban poet Nicolás Guillén’s poems set to Rumba percussion with musicians Melvis Santa and Roman Diaz.

To bring the exhibit into lived experience, Ritmo y Color, a free dance program for children aged six to twelve years old will be run in the exhibition space by Cuban dancer and choreographer Luanda Pau. Taking the exhibit as starting point, the workshops will give children who would not have had access to summer dance programs, the opportunity to explore Cuban dance through movement and art, creating links to their own cultural heritage.

Prints are available for sale from photography@jessicaangel.com 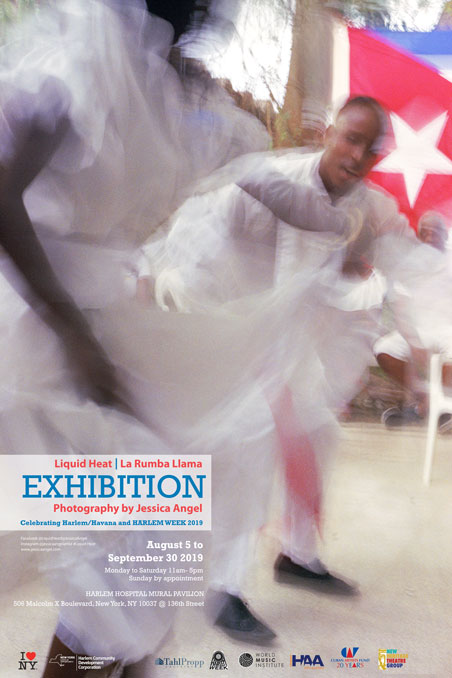 I wanted to create an installation that would express the improvised and endlessly creative nature of Cuban Rumba and give the viewer the sensation of being in a Rumba. I was fortunate to collaborate with dancers Domingo Pau and Luanda Pau, and work both with renowned Afro-Cuban dancers and the Pogolotti community, a Havana neighborhood famous for its Rumba, to create a series of vibrant, life-sized photographs that capture the energy and passion of Rumba.
Jessica Angel